One of the most recent hires at Nobleo Technology, Max van Lith, has been nominated for the prestigious Constructors Award 2017.
This price is awarded to the student with the best graduation project in the field of Mechanical Engineering. Participating universities come from the Netherlands and Belgium and the winner receives a trophy,
a certificate, a money prize but above all eternal fame.

High time for a closer acquaintance with Max van Lith:

Max, congratulations on your nomination! Who exactly nominated you?
“Candidates are nominated by their supervisor or professor. In my case, that’s Nick Rosielle of the Eindhoven University of Technology. That came to me as a big surprise. I went on vacation after graduation and after a few weeks of work at Nobleo one morning I received an email that I would apparently be nominated. At that time my graduation was behind me for two months.”

Interesting, what was the biggest challenge in this regard?
“The cluster tool posed the biggest challenges for me; how do you design a z-mechanism that contaminates as little as possible? How do you deal with the deep vacuum conditions? A cluster tool on the inside is about as high as a foam collar on a freshly drafted beer. How do I make sure my z-mechanism fits in nicely? How do I get enough stiffness within that limited height? How do I make sure that the moving mass remains low? In addition, cluster tools must keep running for 24/7. So how do I design a z mechanism that works reliably? Working with cluster tools involves more than enough challenges.”

What does the nomination entail?
“The Wim van der Hoek Award is a prize for the best graduation project in the field of mechanical engineering. Wim van der Hoek was a pioneer in this discipline between the 1960s and 1980s as a professor at TU/e. Today, in the Netherlands, because of our unique way of constructing, we are one of the best in the world in terms of fast and accurate positioning. The construction principles we need for this purpose have been developed by Wim van der Hoek. Thus the nomination means that my z-mechanism can be considered as the best mechanical design of Dutch and Flemish students. It is, of course, a great honor to be nominated for a prize so early in my career.”

How was the cooperation with your supervisor?
“During my graduation I sat at the TU/e every monday with my supervisor. He then held a consultation with all of his students. That was the designated time of the week to evaluate progress and brainstorm about problems I encountered. The regularity prevented that problems became too big to address themselves so that I could continue to design effectively.
Partly thanks to this cooperation, I have never been stuck on a single issue for long. I graduated from VDL ETG. Also there I had a supervisor. With him I could discuss the deliverables for VDL ETG. Since he graduated only a few years ago from the same professort at TU/e, he understood my process very well. As a result, we have always been able to define specifications that were realistic for me to achieve while maintaining the interests of VDL ETG. ”

Why did you choose VDL ETG?
“I knew that VDL ETG was focusing on the high tech industry, but I did not have a clear picture. VDL is of course a huge company in this region, they make too much to mention. When I received this assignment, I understood what kind of problems VDL ETG is dealing with and they offered me an interesting challenge.
In essence this was very simple: lift a silicon disk.
It were the preconditions imposed by the cluster tool, which made it so challenging. In addition, VDL ETG has played an important role for Eindhoven since its launch as Philips Machinefactories. It is, off course, beautiful as a student to be part of something that is typically Eindhovens. ”

What were the conclusions of your project?
“In traditional wafer handler robots, we see that contamination is solved by making special seals that are often expensive and especially heavy. This reduces the cost of a robot and reduces performance as the requirements for contamination become tighter. During my graduation, I decided to tackle these problems differently: If there is no source of contamination, the seals can be completely omitted. Sources of contamination are frictional or rolling contacts, collisions and expulsions in the vacuum. In the base my design is elastic straightening with a contactless actuator. As a result, my z-mechanism does not play any frills, it does not feel friction and no lubricant is required. In addition to the fact that the design inherently does not produce contamination, the movement is very precise and there is no wear. The analyzes I’ve made show that the design meets all the requirements.” 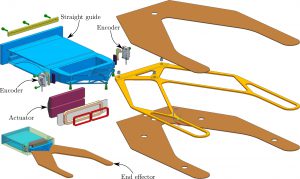 What is your best memory of this project?
“That can not really be summarized in a single example. It was especially the growing awareness of what the consequences of my design choices would be.
It began with the choice to remove all sources of contamination. I’ve made some sketches of elastic straight lines schematically, with the block “contactless actuator”. Each time I gave the designs more detail or finished a new analysis, my trust in the design increased. Slowly but surely, I realized that I had design choices that made it possible for all the requirements to be met or surpassed. The idea that I could design beautiful machines- that’s why I initially chose my mechanical engineering study. During my graduation I realized that I could actually achieve it.”

How did you end up at Nobleo Technology?
One month before graduation, I received a Whatsapp message from a friend of mine who already worked at Nobleo. He asked if I wanted to chat with someone from Nobleo. A few weeks later, I met with a Business Developer. I did not know in advance that it was a job interview, I thought that it would be more or lesss an informal introduction. Therefore, I was completely unprepared. That is why we had a very open and fair conversation. It was not a mutual sales pitch, as it sometimes occurs on formal applications. I felt very welcome and I was taken seriously by Nobleo. After a second and third conversation I received an offer. I have applied at some other companies, but the atmosphere and contractconditions at Nobleo were just lots better. I felt at home here, so I think I’ve come to the right place.

“What is your ambition at Nobleo?”
I think I’m too young to know exactly what I want to achieve with my career. At Nobleo, I get the opportunity to perform assignments for different parties and to gain experience in the branche. Then I can specialize in a specific direction that I feel the most comfartable. For the moment, I do not worry about that. I’m just going to design the comping time and hopefully build some machines that I can proud of.”

Nobleo Technology’s ROS experts, together with Eindhoven University of Technology have investigated a number AMR and AGV navigation schemes.

There is a continuous need to increase the functionality of machines and robots for manufacturing and inspection tasks. Underlaying driver is the need to reduce the amount of human involvement in the execution of these tasks.

Nobleo made its debut at ROSCON 2021 with their high-performance navigation module for industrial mobile robots.

Harm Schepens is featured in Mikroniek

Harm Schepens is featured in Mikroniek with his thesis on extending ADAT2 equipment lifetime.

Thanks to Moore's law, these days human mankind has access to powerful computing platforms. This enabled massive innovation in the field of Artificial Intelligence in past years.